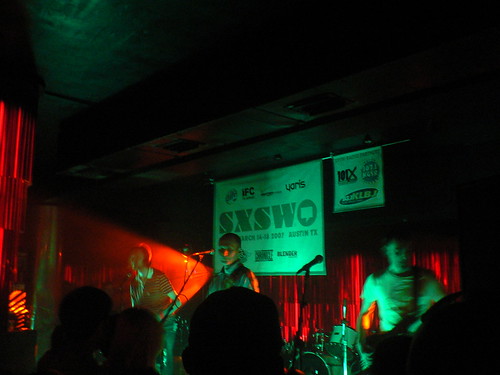 They recently did an NPR webcast as the opener for Peter, Bjorn and John. Prior to that, they did a KEXP/NPR broadcast from SXSW 2007. That wasn’t the show I saw when I was down there, though…

For the 11pm time slot, I headed over towards the other side of town at the Karma Lounge to catch Fujiya & Miyagi. I got in right in time and was immediately greeted with some of the catchiest yet silliest yet totally serious electronic music from the UK trio, including a light show. I thought, “wow, a band with a light show at SXSW — these guys really know what they’re doing.”

Taking back what I said on “silliest,” these guys are all about the catchy, melodic electronic kraut-rock. It’s the kind of music that makes you dance in your cubicle chair, whether you like it or not. Sample below, and go see these guys live. Now.

See…I bet you were just dancing and you didn’t even realize it. Tour dates after the jump.

Relix has announced that it will host its fourth installment of their Relix Music Conference at the Brooklyn Bowl Nashville...

If you're just now starting to hear rumblings across your friend group about this new band called Goose and you...