jimmy eat world in hollywood (more than just “the middle”) 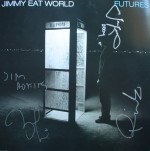 I hadn’t been to the Henry Fonda Musicbox Theatre before, and I was excited. While it doesn’t have the history of The Troubadour or The Roxy, the place is great. It is setup like the Metro in Chicago, but more colorful. By “more colorful”, I mean it literally was gold, red, and purple on the inside. My friend…

…and I were there to see Jimmy Eat World (JEW). Well, I was, but Chris had seen them three times in the last week, and was more excited to see opening act, Emanuel. I am not sure why. Maybe the system was bad, but the group was unintelligible, short little guys with a could be good sound. I wasn’t impressed.

Next up, Recover. I really didn’t catch much of them, but they sounded average. I was actually out back, talking with the members of JEW. My buddy hooked me up with some meet-and-greet passes. The quartet was very nice; they autographed my album artwork (see picture) and shook my hand.

When the band got onstage, the crowd was happy. JEW fans have several CDs to pick their favorite songs from: Bleed American for newer people, Static Prevails and Clarity for veterans. Everyone was there to hear how the newest stuff (from Futures) sounded. Even though the group’s biggest radio hit is, “The Middle” (a poppy, easy on the ears, laid back number), JEW was a rock band this night.

I couldn’t believe the light show. Instead of being above the band (and shining down), there were six towers/posts spread out over the stage. The rotating light mechanisms on these things shined on the CROWD most of time. It was a great effect.

They played for about two hours. I know (and enjoy) many of the band’s songs, so I definitely liked the show. These guys are a straightforward, rocking, pop band. Best songs on the new CD: “Work”, “Pain”, and “Futures”. Check ’em out.

If you're just now starting to hear rumblings across your friend group about this new band called Goose and you...