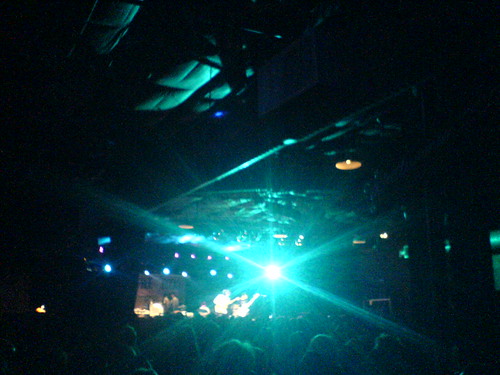 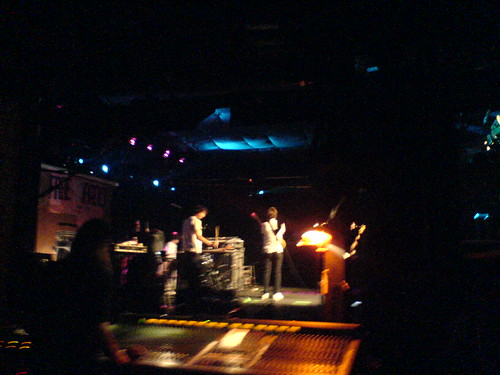 After finishing up my daytime at the Earvolution.com party (and watching a terrible band called We Are the Fury), I grabbed some dinner with Dave and Jeff from the site and chatted with them about publishing, why Blogger kind of sucks, why our parents don’t really read our respective websites, etc.

We were headed over to La Zona Rosa on the other side of town to catch The Rapture. Upon arriving, I was greeted with an empty badge line and they were greeted with a 200-strong cash line. We split up and decided to catch up later, as I really wasn’t going to miss this show given how excited I was.

The Rapture came on promptly at 9pm and proceeded to play an amazing set of music. Really…I was truly blown away, even considering the fact that I saw them recently back home at the Metro.

They opened with “Down For So Long” to work out any sound kinks and all I heard was cowbell from where I was standing. I moved back to the edge of the audience so I got a much better sound spot for the rest of the show, and they proceeded to play their hits from both of their albums, Pieces of the People We Love and Echoes. Their rendition of “The Sound” was incredible, “Sister Savior” was tight, and really — everything they played was nearly pitch-perfect when compared to the album versions. The real killer was the tune, “Whoo! Alright – Yeah…Uh Huh.” The frontman intro’d the song as such, “the name of this song is…” But the real kicker was the ending, when they launch into that jam after “ya’ll ready, girls?!?!?” the place went nuts. Everyone was moving. And I got chills. And then I smiled.

The band hardly took a break between tunes and that was much-appreciated considering that they only had an hour. All in all, a wildly fun show to help start off the SXSW 2007 Music Fest and I was psyched that I got to see it.

The long-awaited Tom Petty and The Heartbreakers Live at the Fillmore (1997) is out today, and I can't wait to spend some...

Trey Anastasio has just announced that his incredible run of shows dubbed The Beacon Jams is getting an official release...

“Put your junk in that box!” | New SNL Video