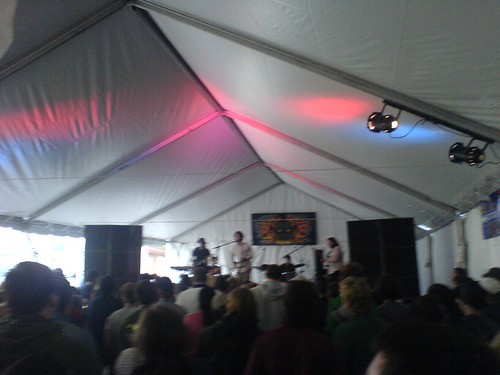 In between my run back to the Convention Center and the Earvolution.com party yesterday, I caught about twenty minutes of Apostle of Hustle at Emo’s outdoor tent.

Immediately, I was floored.

They’re a band that I’ve only heard of before and I knew that they were on the same label as Broken Social Scene (Arts & Crafts) — that’s it. Right away, though — I was grooving right along with the tunes they were playing having never heard of any of them before. It’s indie-rock for sure, but they had a solid grooving rhythm section, including a great bassist that played a really distorted and cool-sounding low end. The frontman was quite dynamic too, so that made them immediately interesting to watch.

They’re playing two shows today — one at 2pm and one at midnight — so I hope to catch at least one of those sets and report back with some more photos and hopefully another great live music experience. I’m sure to be pleasantly surprised. Catch these guys out if you have a chance and let me know what you think…