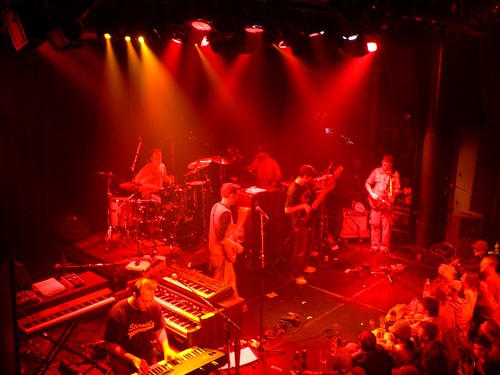 The road warriors in Umphrey’s McGee have added significantly to their already-busy 2007 in support of their new release, The Bottom Half.

I had their new album in our CD changer while on vacation in Maui, driving around, listening to my hometown boys, watching whales — you know, the usual. I was nicely impressed by the first disc, though. The band has always had a knack for putting out concise releases but I wasn’t really into the Safety in Numbers release. This was a pleasant reversal for me, which is odd considering that the releases were both recorded during the same sessions.

At any rate, I’ve been on an UM diet for a little while now and it’s high time I return to the band that I’ve probably seen more than any other band…ever. They’ve given us an mp3 to share from The Bottom Half and I love the way this one turned out…

Update: I inadvertently forgot to include a link to their latest podcast, featuring some insights into the new release and their recording process in general.

Brendan, Jake, Joel and Kevin Browning (sound caresser) stop by to preview Bright Lights, Big City, a track off the new album from Umphrey’s McGee, The Bottom Half, due out April 3. They stick around to talk about the recording process, and what inspired them to release the double-disc album of material from the Safety In Numbers sessions.

Tour dates after the jump.

For a little more detail on the Green Apple Music Festival, go here for a full event listing and some commentary…