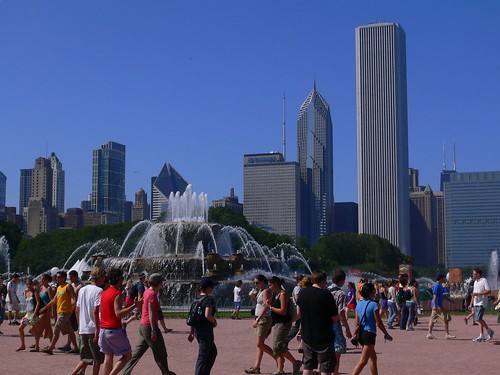 In an blessing-in-disguise turn of events, I find myself in Chicago the day before Lollapalooza 2008 begins and I’m amped as hell for the festival to get underway. This will be my third year in a row attending the fest, although this year I only plan on going Friday with the hopes of catching an incendiary Radiohead performance. Some of the rest of the LMB crew will be there on Saturday and Sunday to round out the coverage, so we should have a nice roundup of photos and reviews following the weekend. And I really have no doubt that we’re in for a treat; both times prior that I’ve attended this festival were fantastic. I’ve seen some incredible music at this event over the past few years — Daft Punk, Pearl Jam, The Black Keys, Wilco, Manu Chao, The Rapture, you name it, really — and I hope the storms stay away tomorrow long enough for us to get our groove on in the middle of Grant Park.

Given that we’re breaking up the coverage a bit between us bloggers here, I figured I’d give a preview of what I plan on seeing tomorrow with a few Plan B’s in mind in case logistics don’t allow me to follow my plan to a “T.” I didn’t even bother putting together a schedule because one day is easy enough to process, but if you’re going make sure you follow along and mark your calendars for the stuff I tell you to go see.

Starting the day off was usually something I waited for until I really, really wanted to see a band and get situated for the rest of the day. Tomorrow is no exception for me. Even though my buddy swears that Bang Camaro are worth catching live, I’m opting to arrive just after noon to catch one of my favorites over the past year.

If there’s one band that I could swear I have not seen enough over the past year to be fully satisifed, it would have to be Holy Fuck. Having caught them only briefly last year opening up for !!! at the Metro, I knew I needed to spend a bit more time with them down at SXSW 2008. Thankfully they came to Chicago a month before SXSW, so I got to catch them at Schubas with A Place to Bury Strangers. Then down in Austin, I caught the fantastic set they did at the brooklynvegan party while this drunk chick made love to me with our clothes on and while Sam watched me and laughed the whole time. Then they released the video for “Super Inuit” and I think I decided that I absolutely love this band. It’ll be interesting to see how well the sound translate to a larger, more-booming stage setup and I have no doubt that these guys will get the field of early arrivals dancing their asses off.

From there, I’ll turn around and watch one of my other favorites from the past year.

I’ve been admiring this band for a while. They have a lighter indie sound, almost straight-up emo at times, but it’s some of the best songwriting and melody pairings I’ve ever been drawn to. Earlier this year they played Schubas and I got to see the show right before I moved to the Bay Area. I didn’t write anything up which is somewhat stupid in hindsight, because I seriously loved every second of the night. I had seen them for a brief 45-minute set at SXSW and only left more unsatisfied than before.

Check out these clips from their set that I mention above; at about 0:15 seconds in you can hear me scream my friggin’ lungs out after my buddy shouted, “take off your shirts!” Later in the night, everyone was throwing out requests and I thought I’d would be a bit of an oddball by shouting, “Ghostbusters!” Zach Rogue took in all the requests in stride but he held his fist towards his chest and mouthed “Ghostbusters…” as if he was truly impressed by such a heckle. I felt cool.

At this point, the schedule becomes full of minor decisions that would probably largely depend on the weather at the time we decide what to do next. I could turn around and check Yeasayer out again, as I’m 100% confident that would be a set I would enjoy. I’m pretty sure we’ll check out a song or two by the tastemakers from Brooklyn but we’ll probably go check out Jeff Tweedy on the Kidz Stage. Or maybe we’ll go see Holy Fuck again, depending on how seriously awesome they rock our socks off from their midday set. It’s really hard to know what’s best here, so any combination of the above would be something I’d find interesting and hopefully fun.

From that mess, we’ll make our way through the Buckingham Fountain area to head over to the end of Duffy’s set, and then we’ll be nicely placed for a band I’ve been eager to see again ever since checking them at last year’s Lollapalooza.

The Black Keys had me mostly speechless at Lolla ’07. For as many good things as I heard about the band, I just never really got into them and their stripped-down blues-rock sound before that. But seeing how much sound these guys put out and how well their sound translated to a large-scale stage, I knew I’d be hooked going forward. The Danger Mouse produced Attack and Release is a fantastic album and I totally can’t wait to see some of the newer stuff get performed live.

I’m know very little about Cat Power, but I know Chan Marshall seems to draw quite a bit of attention to herself. I seem to remember a lot of being the result of this photo, so I’ll see what her music is all about and get my strength together for the set immediately following.

I’ve been waiting a while to catch The Raconteurs, as I’ve been a fan of the “side project” ever since it started. I’m not sure if I’ll be catching the entire set because I want to get over to the other side of the park to get a good spot for Radiohead. But we’ll see.

I have a minor confession to make here — I really wasn’t a big fan of Radiohead until their In Rainbows album was released. I always respected their work and always respected the career, but it never really clicked for me until I heard the studio version of “15 Step.”

If you’re looking for me tomorrow, I’ll be the 230 lb. guy in the middle of the mud pit dancing like Thom Yorke. I think you’ll find me.

46
No Result
View All Result