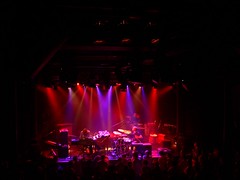 Many more artists have been added to the Bumbershoot 2006 lineup, including Blondie, Spoon, and Steve Miller Band (!!!). Awesome.

Bready went to see GRAB at Jones Beach this weekend. I’m getting pretty psyched for the Chicago show.

It looks like Summerfest was having some problems keeping the power on this year; read more here.

Monsters and Critics reviews the new Benevento/Russo Duo album, Play, Pause, Stop. I’ve been thoroughly impressed with this album so far — pick it up now!

Reuters has a small preview of the Phish Live in Brooklyn DVD due out tomorrow.
“Only complaint: Where are the two songs with surprise guest Jay-Z(!!) from the following night’s gig at the same venue?”