Camp Bisco 9 just wrapped up this past weekend in upstate New York, so I rounded up some links from the festival coverage making its way online. Got a link to share? Drop a comment if you went to the festival and shot some photos or took video. It looks amazing based on the stuff we’ve seen rolling into our inbox. Here are some of the highlights:

I’ve been hating on the Disco Biscuits for quite some time now. To everyone that’s heard me do this: I’m sorry.

Latest Accessory of a Well-Equipped Band: A Festival of Its Own [NY Times.com]

Around 2 a.m. on Friday on a wooded hillside here, about 30 miles northwest of Albany, a few thousand young music lovers poured into the humid summer darkness from a tent where they had just seen an up-and-coming band with a two-word name. The first word is Holy. The second is anything but.

Some of the fans had been seeing live music for almost 12 consecutive hours on the first of three days at Camp Bisco, the weekend celebration of the fusion of electronica and improvisational rock that has become one of the hottest small music festivals in the country.

Lefsetz seemed to love that article above and also posted it on his blog, calling it “an utterly fascinating story that should be read by bands and concert promoters alike.”

LCD opened the set with “Us V Them” from 2007’s “Sound of Silver,” followed by a crowd-rousing rendition of “Drunk Girls,” the first single from “This Is Happening”. Other favorites including “Pow Pow,” “Daft Punk is Playing at My House,” and aging hipster anthem “Losing My Edge” were electrified all the more by fans’ glow wands, laser lights and inflatable animals on poles. The band closed with Morrissey-esque ode “New York I Love You,” to which they added a slow, ghostly version of the vocal hook from Jay-Z and Alicia Keys’ “Empire State of Mind”.

I saw every type of person at Camp Bisco. I saw high school kids, college kids, post-college aged people, young adults, middle aged adults, and senior citizens. I saw preps, goths, skaters, punks, hipsters, hippies, bikers, nerds, and every other stereotype you can think of. … They were united by the music, maaaan.

Here’s the inevitable local news report showing how many people got arrested. To put in context, there were a reported 15,000 visitors to the festival this year.

The Schenectady County Sheriff’s Office says it made seven drug arrests, one DWAI arrest, and seven vehicle and traffic violation arrests, while conducting a traffic safety checkpoint at the Camp Bisco Festival at Indian Lookout Country Club over the weekend

Note: 15 violations or so out of 15,000. Also note the UNTZ’d concentration of uppers compared to downers…

PT has the full set of Bisco setlists from the weekend… 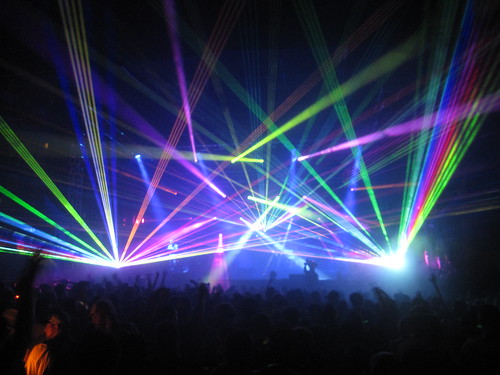