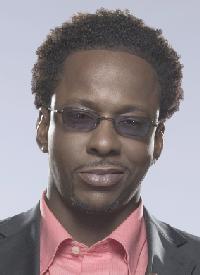 Note to Bobby Brown: if you start to get booed off stage…ever…please do not actually stay on the stage. Just trying to help…

Bobby Brown gets booed at the Essence Music Festival.

Brown performed with New Edition Sunday at the Essence Music Festival in Houston. By the time they were finished, the audience was screaming for Brown to get off the stage. The other five members kept up their slick choreography, but Brown was running wildly around the stage and doing raunchy dance moves. Brown left the stage as the rest of the group did some ballads, then Brown did a solo set. He continued with the raunchiness, took off his shirt and talked about his sex life with Whitney Houston. By the time he finished “My Prerogative,” fans were yelling for him to leave.

I’m reaching for my desk garbage can right now as I might just vomit thinking about Bobby Brown and Whitney Houston’s sex life — I imagine crack, weird dialogue, and numerous headsets are involved somehow.

He kept going, though. He continued with the raunchiness. Hilarious.